The Parish Church of Hambledon, dedicated to St Peter and St Paul, stands at the top of the hill overlooking the village spread along the valley below. The main structure of the large and complex building dates from the 13th century. However, within this shell there is an almost complete late Saxon church dating from 11th century making it is the oldest structure in the village.

Later additions include a 15th century porch and the 18th century tower rebuilt in 1794 following a near catastrophic fire. The church was carefully restored in 1876 with various Victorian alterations and most recently has had significant work carried out to replace the roofs of the south and north aisles. The church has been the centre of the Hambledon community for more than a 1000 years and remains today the focus of religious life.

Before the Norman Conquest in 1066 there stood a Saxon church on the present site. The thatched model in the Welcome Area in the north aisle shows a possible outline of its appearance with a nave about 40 feet long and 18 feet wide. The chancel measures 16 feet long and 14 feet wide. This simple little church may have been one of those ordered to be built in stone by King Canute, in place of an older wooden one burnt down by raiders from the sea. Today this Saxon church is at the heart of the larger building. 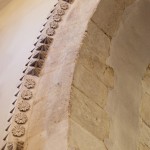 The great enlargement of the church occurred in the 13th century in several stages. Early in the 13th century the Saxon chancel arch, which would have been massive and round-headed, was replaced by the very fine, and pointed, Early English arch which still stands in the middle of the length of the nave. 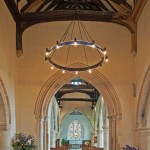 Later on, the Saxon chancel was lengthened, and the aisles were extended, first on the north and then on the south side. A course of stone at the top of the wall in the eastern part of the north side, extending as far as the middle of the second arch, shows the length of the Saxon Chancel. Later still the chancel that we now see was built further to the east. Large squints on either side of the second chancel arch give a good view of the altar from the aisles. The western tower was also built during the 13th century.

In the south wall of the chancel a piscina, used for rinsing the sacred vessels, can be seen. In the wall of the south aisle there is an aumbry or recess for a cupboard. Near the south door are the remains of a stoup or receptacle for holy water.

Both the vestry abutting the west tower and the south porch were built about 1500 and were in two stories. Above the south door may have been the doorway cut obliquely through the wall leading to the upper room of the vestry via a gallery. Remains of a stone drain from the upper floor can still be seen on the outside of the vestry wall. It is thought probable that a priest or hermit lived in these chambers. (At some point the floors were subsequently lost.) During the 15th century some of the Early English lancet windows were replaced by Perpendicular windows. Also from the 15th century is some good carving on the much restored pulpit.

In 1788 a near catastrophic fire resulted in the loss of much of the medieval structure at the west end of the church. The upper stages of the tower and a good deal of the west and north walls of the tower had to be rebuilt. The recently rehung peal of 6 bells survived the conflagration however and still regularly ring out across the valley. 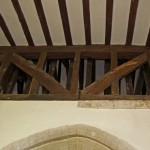 The regimental colours hanging over the south aisle were those of the Hambledon Volunteers during the Napoleonic Wars. These early decades of the century saw little development in the church, although a project was mooted in 1836/37 to introduce a large gallery in the west end and make some other changes. It is not clear to what, if any, extent this work was carried out, but an architect’s model survives from the period, and shows what was involved. (This model is displayed in the Welcome Area in the north aisle.) However certain roof repairs were carried out in 1858 (which included lowering the point at which the vestry roof meets the tower) and in 1876 a significant (but restrained) restoration of the church was carried out. It was this restoration that uncovered many of the medieval features mentioned earlier. The west doorway is a Victorian copy of the Early English work and the west window is also Victorian. The old font, which had been in the church for over 400 years, was given to Denmead, then a daughter church of Hambledon and now an independent parish. Today’s font is a Victorian replacement gifted by the family of a long-serving vicar. 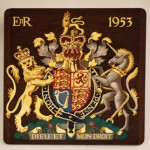 A long-term scheme for the improvement of the church’s interior was undertaken in the late 1960s on the recommendation of Stephen Dykes Bower, Surveyor of the Fabric of Westminster Abbey. The choir stalls were restored to their original position in the chancel and the old organ removed. A new two-manual organ was installed in the south aisle with the pipes mounted high in the nave. The organ box and the chancel roof were decorated in a distinctive medieval style. Other changes included the replacement of the Victorian tiling of the chancel floor by light coloured stone. The altar was lengthened and a dorsal curtain toning with the colour of the east window replaced the wood panelling. In 1990 the upper floor above the vestry was restored and serves today as a meeting room.

To celebrate the beginning of the Third Millennium of the Christian faith, a small chapel was created at the west end of the north aisle. Contemporary artists and craftsmen have designed and made the furniture. The altar is made of English oak decorated with religious and farming symbols. The sculptured crucifix draws inspiration from crosses found in other Norman churches. The commemorative floor tablet has the inscription:

In the churchyard a Millennium Yew has been planted. This is a sapling grown from a 2000 year-old yew, and symbolises the continuity of the Christian faith.

On display in the church you will find a guide, which can be purchased. Please place your donation in the wall-safe, which may be found to the right of the south door as you leave.